Though initially seen with her new-born and two other adult dolphins, the mother dolphin, was the only individual from this group which had a clear enough marking on the dorsal fin to allow us to identify her. She has two small notches near the top of the dorsal fin which can be seen from either side on good quality photographs. This feature has been so important in allowing us to follow this mother-calf pair and be sure that we are seeing the same animals each time. As is usually the case, the calf was born with no distinguishing features, but she may develop an identifying feature whilst still associated with its mother so we can follow her in the future. 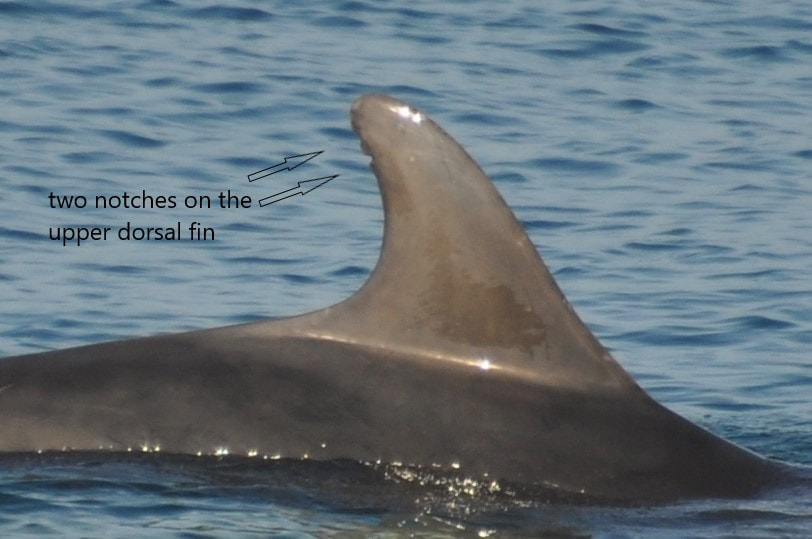 ID shots of the dolphins can be seen below. If you are lucky enough to see them and have a good camera, try to get clear, side on images of the dorsal fin which will allow us to confirm their identity. 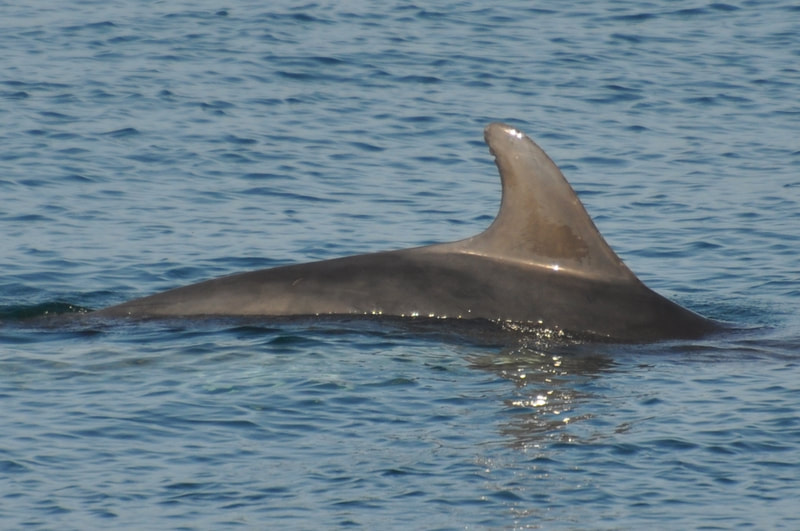 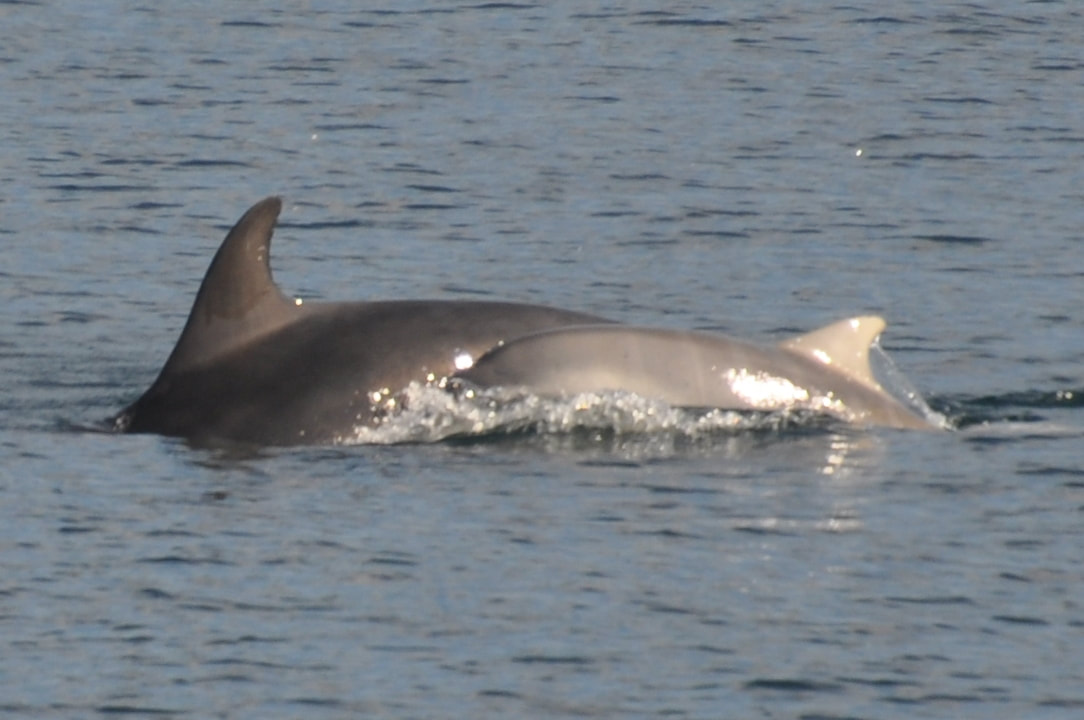 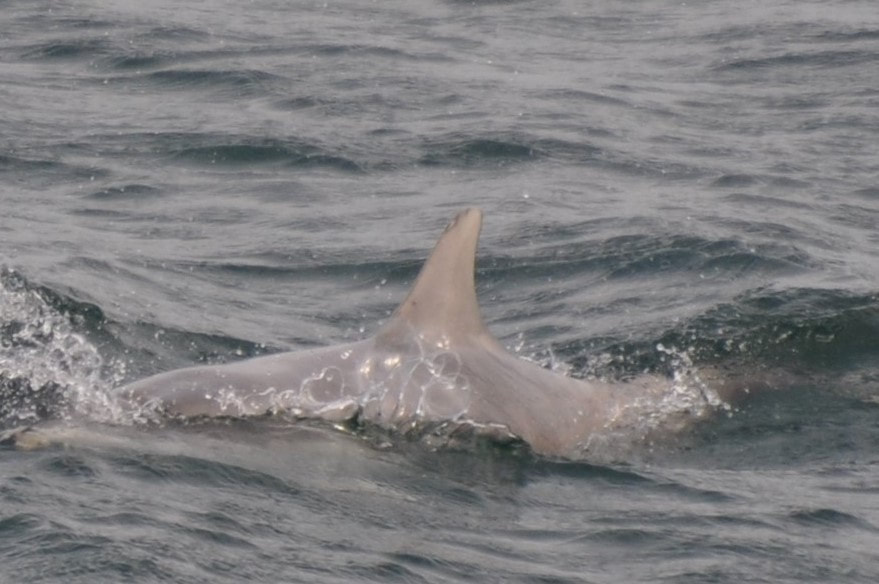 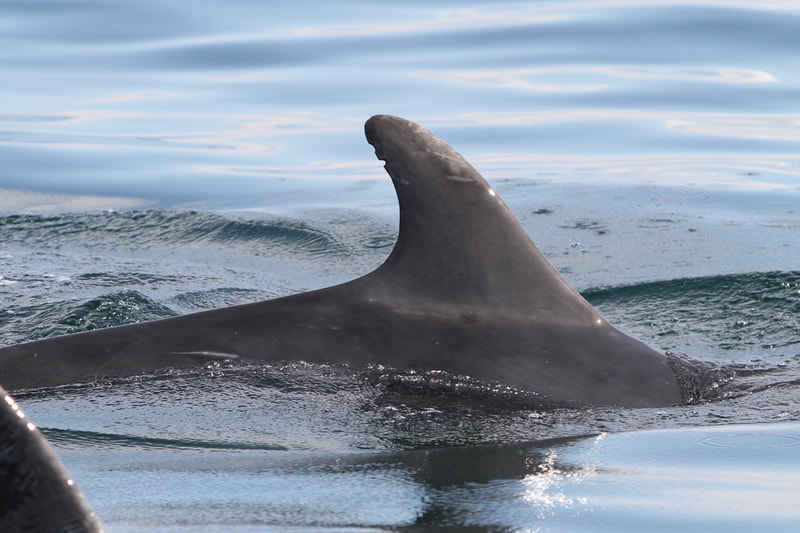 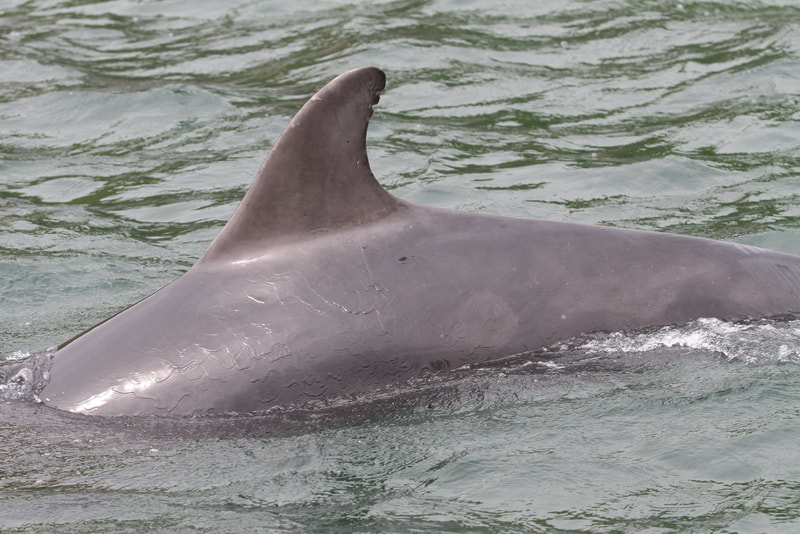 How to spot the family

Moonlight and Starlight can be very easy to spot, and are usually seen between Peel and Ramsey via the north, though they do sometimes check out other bays such as Port Erin. They prefer the shallow, sandy coastline of the north. They are very bold, often swimming within just a few metres off rocks, beaches and breakwaters, making them easy to see with the naked eye. They are not afraid to approach and interact with swimmers, kayakers and other boat users. All interaction must remain on their terms and MWDW monitor human-dolphin interaction closely.
Follow us on Facebook or contact us to join our live sightings feed on Telegram messenger. Moonlight and Starlight have chosen to make the Isle of Man their home and we want to see them continue to thrive here. Wouldn't it be amazing if they stayed for many years to come!?

As they are so easy to see from the coast, there is absolutely no need to get out on the water with them, and we encourage people to view them from the shore. If you are on a boat, kayak, paddleboard or swimming, especially in Peel or Port Erin, the dolphins may approach you, and it is important to know what to do in this situation. This is recommended for the safety of the dolphins but also of yourselves. Moonlight is huge, she measures almost 4 metres in length and may weigh up to 500kg. Bottlenose dolphin play can include shoving, ramming and swimming at high speeds.
Please follow the below advice:

1) On a boat or jet-ski- Lower your speed and retain a steady direction of travel. If the dolphins choose to ride with you it is important that you do not make any erratic movements or sudden changes in speed or course.
2) On a kayak or paddleboard- stay inside your craft and let the dolphins play around you. Do not put your hand or paddle out to touch them.
3) Swimming: if they approach you in the water, remain calm and do not attempt to touch them or grab their fin

Do not feed the dolphins. They are still very much wild animals, and throwing fish to them may encourage human habituation. It may also make them come too close to vessels and their propellers.

Whales, dolphins, porpoises and basking sharks are protected in Manx waters under the Wildlife Crime act 1990 and it is a criminal offence to harass them. If you have evidence of someone causing disturbance you can call the Isle of Man Constabulary Wildlife Crime Team on 01624 631212.