The Isle of Man's temporarily resident, and solitary, bottlenose dolphin mother and daughter

In September 2019 a new-born bottlenose dolphin was filmed close in to a bay on the Isle of Man's south coast. The mother has been identified as Moonlight- a well known dolphin from the Moray Firth, and her calf, who we now know to be female, was named Starlight by the Manx community. For more than 3 years, our island has been blessed with wonderful, frequent sightings of this mother and daughter bottlenose dolphin.

In July 2020, Manx Whale and Dolphin Watch began compiling all sightings, photographs and videos on this dedicated site, and continue to document their travels and behaviour. All sighting reports of the pair are logged on the main MWDW website www.mwdw.net in order to monitor their movements and ensure they continue to be safeguarded around our coast.

Why are these two dolphins so special? Well, this is the first time we have known of a dolphin mother and juvenile 'solitary pair' who can be considered resident to the Manx coast. It is also the first time that we have been able to document a new-born dolphin as it grows up and learns how to be a confident and efficient hunter. This pair are so frequently seen within just a few metres of our beaches, allowing us to gain an unique insight into their lives.
They always stick together and have never been known to associate with any other dolphins. Larger pods of bottlenose and other species pass through, but Moonlight and Starlight always keep their distance.

Despite their increasing confidence, they are still very much wild animals, and it is very important that any interaction with humans remains on their level to avoid habituation. We continue to work with the Manx community to ensure this pair remain safe in our coastal waters.

Please see the Story and Sightings page and scroll to the bottom for the most recent updates.

A little background into BOttlenose dolphins in manx waters 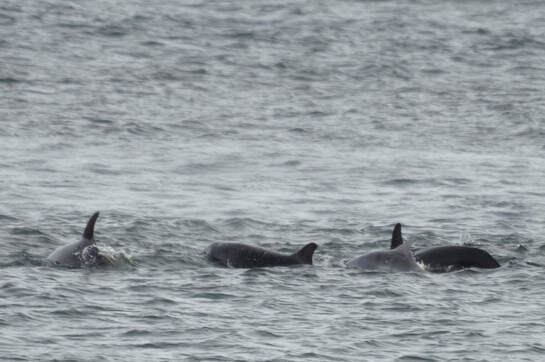